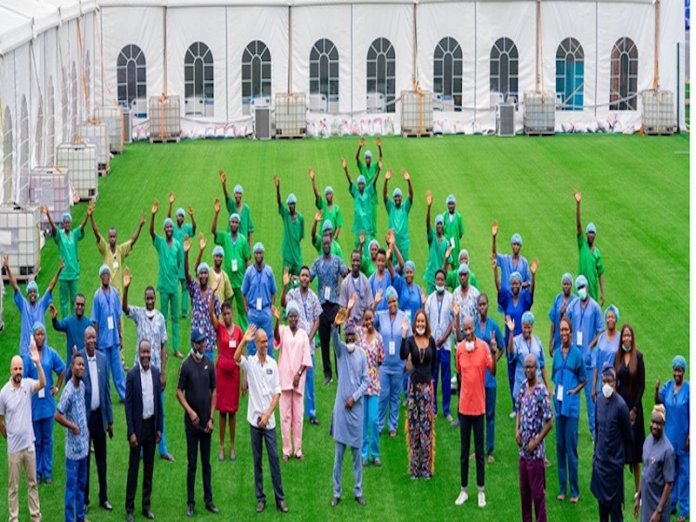 Contrary to popular belief that Nigeria’s COVID-19 burden would, 188 days
after the first recorded case, lead to human and economic catastrophe with
millions of infections and hundreds of thousands of deaths recorded, the nation
has against all odds managed to keep the its burden at a minimum level with
morbidity rate relatively low. Martins Ifijeh writes that one of the key persons behind the successes recorded so far are health workers who are the front line army risking their lives to keep the nation safe

Prior to the start of COVID-19 outbreak in Nigeria, healthcare workers in the country were some of the major workforces least given deserved priority by their employers. They at several occasions had embarked on protests and strike actions, all to register their displeasures.

For some, there was no need giving their all to a country that has refused to fix the health system and regard its personnel. Majority were scheming their way out of the country for job satisfaction abroad since for decades the
country’s leaders had refused to give their sector the needed priority.

But when COVID-19 broke out February 27 in Nigeria with the confirmation of the virus in an Italian national who flew into the country from Turkey three days earlier, healthcare workers set aside their grievances; their poor working conditions; their perceived disrespect from their employers; as well as their zero hazard allowances because it was time to think of Nigeria first before their personnel happiness.

They had seen the devastation the pandemic was having on otherwise developed and rich nations and they knew if they make a volte face against the looming crisis at the time, Nigeria would become history with dead bodies recorded in droves and several millions of COVID-19 infections documented every day just like was seen in
Italy, Spain, Brazil, Mexico, among others. They knew every nation had turned to itself and no foreign help was coming to save Nigeria except Nigerians like them who could fight diseases.

On specifics, many doctors, nurses, epidemiologists, laboratory scientists, among others volunteered to become frontline workers interfacing with COVID-19 patients, with many of them scattered around Mainland Infectious Disease Hospital, Yaba; Irrua Specialist Teaching Hospital Isolation Centre, Kano Isolation Centre; COVID-19 Incident Commands across the nation, among others. It didn’t matter to them whether the virus was highly infectious and had been killing thousands of healthcare workers abroad. It didn’t matter to them that their decision was going to deprive them of seeing their families, having time for themselves, or having them being
stigmatised in the society.

By the time these frontline personnel commenced work, they met lack of personal protective equipment; zero hazard allowances for the dangerous job; harassments by security personnel, especially on issues around movement restrictions; among others. And then within weeks of caring for COVID-19 patients, not few of them contracted the virus – from University of Benin Teaching Hospital, to National Hospital, Abuja, to Lagos University
Teaching Hospital, and to several other health facilities in the country – the story
was the same.

As at the last count in June, not less than 700 healthcare workers, including doctors, Nigeria Centre for Disease Control (NCDC) staff, nurses, laboratory scientists, epidemiologists, have been infected. There appears not to be any record yet on how many more have been infected since then till date. Several tens of the workers have paid the supreme price. Those who loved them would still have been seeing them till date if they
(health workers) didn’t volunteer to become COVID-19 frontline workers.

But because of these huge sacrifices, several thousands of COVID-19 patients have fully recovered, and have reunited with their families. This sacrifice has helped in reducing death rate from the scourge. So far, not more than 1,015 Nigerians have died from a serious global pandemic that has claimed almost one million lives across the world. The
country’s infection rate is still around 55,000.

188 days after the first case of the virus in the country, the world, including Nigerians have become surprised at the continuous decline of the virus in the country. Nigerians have played their role in the flattening of the curve. The adherence of social distancing and wearing of facemasks have helped. The donations by the Coalition Against COVID-19 (CACOVID) has helped. The leadership by the Presidential Task Force on COVID-19, NCDC, Ministry of Health, that of aviation, foreign affairs, among others have helped.

In all of these, Nigeria’s biggest heroes in the fight against the pandemic are health workers. They are the soldiers protecting the country against national health insecurity. The history of Nigeria’s fight against COVID-19 cannot be complete without the conspicuous mention of health workers who have given their all so every Nigerian can live freely.

Health workers, you are Nigeria’s number one hero against the COVID-19 monster.