A New Island Of Hope Rising from the Indian Ocean

Scattered across the Arabian Sea, south-west of Sri Lanka and India, the Maldives present the face of a dreamy, tropical idyll to travellers from all over the world, who fly in to savour picture-perfect coral atolls fringed with white sand, luxurious resorts and world-class water sport.

We are one of the most vulnerable countries on Earth

But perhaps no other nation faces an environmental threat quite like the Maldives. Its luxury beach resorts may be world-famous, but with more than 80% of its scattered 1,200 islands less than 1m above sea level, rising oceans threaten its very existence.

“We are one of the most vulnerable countries on Earth and therefore need to adapt,” said the country’s vice president Mohammed Waheed Hassan in a 2010 World Bank report that warned how, at current predicted rates of sea level rise, all of the Maldives’ around 200 natural inhabited islands could be submerged by 2100. 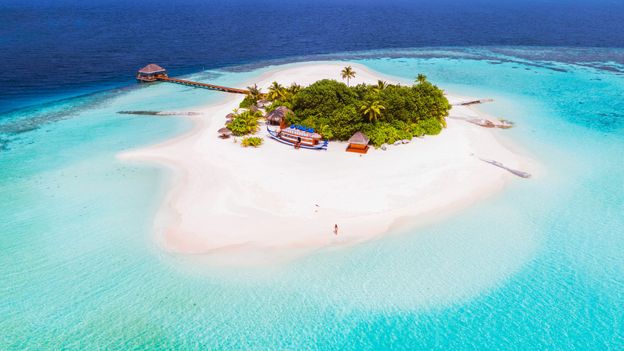 But Maldivians are determined to fight back to preserve their existence. Back in 2008, then-president Mohamed Nasheed made global headlines by announcing a plan to buy land elsewhere so his citizens could relocate should islands become submerged. That plan gave way to considering whether it might be best to work with the sea rather than against it, by building floating urban developments – as has been done in cities like Amsterdam.

Instead, the Maldives turned to a different form of geo-engineering: creating a 21st-Century city, dubbed the “City of Hope”, on a new, artificial island christened Hulhumalé.

Pre-Covid, curious tourists could visit the new island city as it takes shape around 8km from the capital city of Malé by hopping on a 20-minute bus from the airport over the bridge. Yet, few who come to the Maldives on short luxurious breaks will think about the pragmatic social issues Hulhumalé aims to solve. With more than 500,000 inhabitants scattered across the archipelago, delivery of services is one resource-draining logistical nightmare. Lack of job opportunities is another, driving youth unemployment to more than 15%, according to a 2020 report by the World Bank.

As well as the long-term threat of submersion, increasing coastal erosion also threatens the 70% of infrastructure – homes, other buildings and utilities – located within 100m of present shorelines. There’s also worries over encroaching salty seas tainting precious fresh water sources, plus risks posed by unpredictable natural disasters, like the 2004 tsunami that killed more than 100 people in the Maldives.

The new, artificial island of Hulhumalé was built using millions of cubic metres of sand pumped from the seabed (Credit: Hassan Mohamed)

“After the 2004 tsunami, a programme for enhancing resiliency through safer islands was introduced,” explained Areen Ahmed, director of business development at the Housing Development Corporation (HDC) that oversees the City of Hope. “Hulhumalé is being developed through careful considerations of climate change in its architecture and communities.”

Ongoing land reclamation using millions of cubic metres of sand pumped from the seabed has raised the new island more than 2m above sea level, while the island’s growing City of Hope is seen as a vital new settlement to relieve the over-crowding that currently blights Malé, where more than 130,000 people cram into 1 square mile (just more than 2.5 sq km).

“Malé is one of the most densely populated cities on Earth,” said Kate Philpot, who worked as a science officer in the Maldives, researching reef fish for the Korallion Lab marine station, before becoming senior ecologist at UK-based consultancy Ecology By Design. 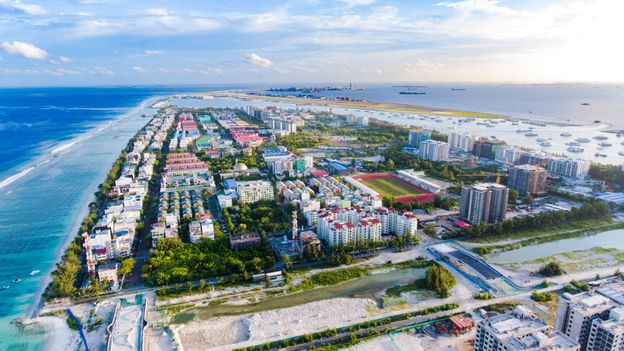 The new island will eventually house up to 240,000 people and help reduce over-crowding in Malé (Credit: Mr Sham’aan Shakir- Shammu)

But ambitions for Hulhumalé are far greater, eventually envisioned as hosting up to 240,000 people in well-designed style by the mid-2020s. This vision includes a diverse mix of quality housing, new employment opportunities plus open recreational space three times larger per person than Malé.

According to Ahmed, in contrast to the unplanned and over-crowded nature of Malé, Hulhumalé was designed with many green urban planning initiatives. “Buildings are oriented north-south to reduce heat gain and improve thermal comfort. Streets are designed to optimise wind penetration, reducing reliance on air conditioning. And schools, mosques and neighbourhood parks are within 100-200m walking distance of residential developments, reducing car use.” Electric buses and bicycle lanes are also part of the new city landscape.

Varied housing needs are also being catered for. “Hulhumalé comprises diverse housing projects: mid-range, luxury and social housing,” said Ahmed. “Sixty percent of mid-range housing units have to be sold under the pricing ceiling set by HDC.” Affordable social housing is available for specific groups, including single women and those affected by displacement and disasters. There has been detailed consultation to ensure housing and the wider built environment is accessible to those with disabilities. 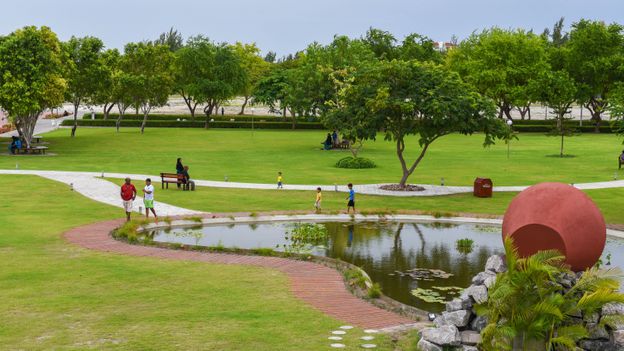 Hulhumalé has been designed with green urban planning initiatives and sustainability in mind (Credit: Hassan Mohamed)

“The ultimate benefit of building a Smart City from scratch is that Hulhumalé will be seen as a city of resilience – built by the people of Maldives for the people of the Maldives,” said Professor Hassan Ugail, a Maldivian urban planning expert who helped design the city, alongside his work as director of the Centre for Visual Computing at the UK’s University of Bradford.

Malé is one of the most densely populated cities on Earth

Hulhumalé aims to tick boxes with regard to sustainable urban development too, including drawing around a third of its energy from solar power and harvesting rainwater to boost water security. Yet isn’t the very act of building an artificial island something harmful to the environment – especially in a place famed for coral reefs and pristine white-sand shores?

When Belgian company Dredging International completed the 244-hectare expansion of the island in 2015, the operation required sucking around six million cubic metres of sand from the surrounding seabed to then transport and pump onto Hulhumalé.

“Land reclamation work is particularly problematic,” said Dr Holly East from Northumbria University’s Department of Geography and Environmental Sciences, an expert in coral reef islands with experience conducting research in the Maldives. “Not only can it destroy coral reefs, but [it] also creates vast plumes of sediment that travel to other reef platforms. Sediment smother[s] corals and blocks out sunlight, impacting their capacity to feed, grow and reproduce.” 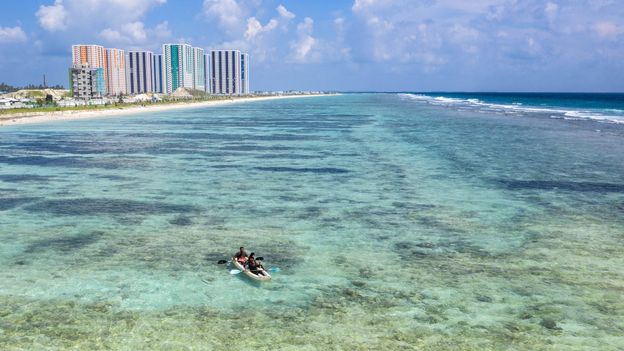 At current predicted rates of sea level rise, all of the Maldives’ around 200 natural inhabited islands could be submerged by 2100 (Credit: Carl Court/Getty Images)

But with its steadily growing population, land reclamation has become a simple fact of Maldivian life, with existing coral reef providing the obvious foundation. “Efforts have been made to reduce impacts of the development of Hulhumalé, including translocation of some corals,” said Philpot. “However, it can take a long time for them to become established elsewhere – and there is often a poor success rate.”

Yet with her years of experience in the Maldives, Philpot is well aware of competing demands. Tourists may come and go, but local people need land to live on and jobs. She also makes the rather ironic observation that Hulhumalé is rising in an area that has already, to some extent, been spoiled.

“Construction is likely to be less damaging than elsewhere in the Maldives,” she said. “It seems preferable to develop an area with relatively high levels of boat traffic and pollution compared to anywhere else within the Maldives that remains relatively unspoilt.”

In this view, she is backed by the World Bank’s 2020 report, which notes “the Greater Malé Region, particularly in Hulhumalé, do not have significant natural habitats – and the coral reefs are mostly degraded”. 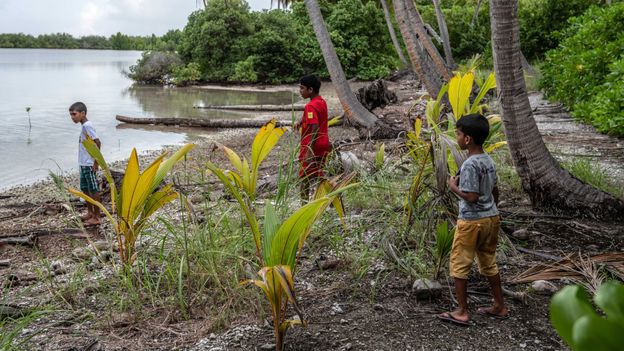 Despite the Maldives’ idyllic reputation, many local children never get the opportunity to go snorkelling (Credit: Carl Court/Getty Images)

Waste disposal remains a key issue – both in terms of construction waste for Hulhumalé, as well as waste from its growing city of inhabitants. “Much of the waste has been transported and stored in the purpose-built island of Thilafushi,” explained Philpot wryly.

Maldivian authorities counter the idea that this is basically a tropical rubbish dump, albeit rather vaguely. “All measures to minimise the impact of construction on the environment are monitored by the Environment Protection Agency (EPA) of the Maldives,” Ahmed told me.

While Hulhumalé is being fashioned primarily to improve the lives of Maldivians, its City of Hope also aims to be a beacon for a new cohort of tourists interested in more than just lying in a beachside resort bubble. A 2018 World Finance report, for example, highlights the potential for medical and sports tourism tied into upcoming projects such as the Maldives’ first multi-specialist hospital, water theme park and yacht marina.

Philpot also hopes the dreams driving Hulhumalé will extend to a greater appreciation of their surroundings by the next generation of Maldivians. “I taught coral ecology classes to Maldivian children between [the ages of] 14 and 17 – and more than half my class had never put their faces in the water with a snorkel on,” she said. “Their amazement at what they saw was so exciting – but also sad, that they lived so close to the sea but never got the opportunity to experience being underwater. Perhaps with more direct education aimed at marine biology there would be more interest in preserving and protecting the marine ecosystem amongst the young.”

Rather than just building a City of Hope, in other words, the people of the Maldives are taking an island-building path into the future that could make the Maldives a Nation of Hope.