Fahim Saleh’s executive assistant faces a second-degree murder charge in connection with the dismemberment of the tech entrepreneur at his luxury Manhattan condo, police said Friday.

The assistant was identified as Tyrese Haspil, 21, who handled Saleh’s finances and personal matters, according to police. He allegedly owed Saleh tens of thousands of dollars, and was on a repayment plan, a law enforcement official said.
Saleh, 33, was found dead in his Lower East Side apartment on Tuesday, police said.
When Saleh’s cousin rang the doorbell to his condo, the assistant was allegedly dismembering his body with an electrical saw and fled, according to a law enforcement official.
The cousin found that Saleh’s head, arms and legs had been severed in the living room of the condo, NYPD Chief of Detectives Rodney Harrison told reporters Friday.
At about 1:45 p.m. on Monday, Haspil allegedly assaulted Saleh with a Taser before killing him, Harrison said. The young tech entrepreneur had stepped out of an elevator that went straight to his apartment, Harrison said.
close dialog
“It is also believed that (Haspil) owed the victim a significant amount of money,” Harrison said.
Saleh died of multiple stab wounds, New York City’s medical examiner said on Thursday.
Haspil was arrested Friday morning in Manhattan. It’s unclear if he has an attorney. 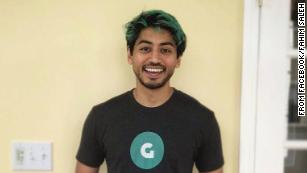 ‘He had a really big smile.’ Nigeria’s tech industry reels from the death of Gokada founder
Saleh was last seen in surveillance video getting into an elevator in his apartment building and a man dressed in all black — who police believe is Saleh’s assailant — entering the elevator with him, according to the law enforcement official.
Saleh died from stab wounds to the neck and torso; the manner of death was homicide, according to the medical examiner.
Saleh, the son of Bangladeshi immigrants, was the founder and CEO of Gokada, a motorbike-hailing app in Nigeria.
He most recently founded the venture capital firm Adventure Capital — which invested in ride-sharing start-ups in countries like Bangladesh and Colombia.
Categories: Business, Health, News, Right now, Slider, World
Tags: death tech entrepreneur, executive assistant, Fahim Saleh, Go Kada Founder, murder, Nigeria, Tech