Nnkechi  Onwukwe, Director of Rehabilitation at the Federal Ministry of Women Affairs and Social Development, does not epitomise the transparency and accountability expected of a civil servant helping to deliver a crucial promise of President Muhammadu Buhari to the common Nigerians.

Onwukwe has perfected the art of frustrating media enquiries about how she manages the  Rehabilitation Department of the ministry. And this lack of accountability in her department continues to frustrate the successful implementation of government policies of inclusion for the 25 million Persons Living With Disabilities (PLWDs) in Nigeria.

The reporter’s call to Onwukwe on Thursday, March 11, was met with usual resistance.

“Good day director”, the reporter began, introducing himself. “My name is GbengaOgundare and I will appreciate if you can give me direction to the National Rehabilitation Institute and Resource Centre in Abuja.”

“What do you want to go and do there”? Onwukwe fired back from the other end.

“Well ma, I am a journalist with a visual disability, and a couple of other blind journalists will like to visit the institute for inspection purpose.”

“Don’t go there, come to the ministry instead,” she offered and hung up before the reporter could ask further questions.

Not satisfied, the International Centre for Investigative Reporting (ICIR) sent a Freedom of Information Act(FOIA) request to the ministry on March 19, requesting for details on the National Rehabilitation Institute and Resource Centre.

The ministry flouted the law by not responding to the request within the seven days stipulated by the FOI act.

Three months later, on June 11, reporter sent another request to the ministry, reminding it of the earlier request. An officer of the ministry called some days after to say that the ministry was in receipt of the letter and that they would respond to the request as soon as the Director of Rehabilitation approves of it.

More than a month after that, the ministry is yet to respond to the request.

That was not the first time Mrs. Onwukwe was dismissive. In August 2019, she also gave a terse response to question about why the Nigeria Farmcraft Centre for the Blind (NFCB) was shut down between 2017 and  April 2019.

“It didn’t open for two years, but it has eventually opened and almost coming to an end to a session,” she responded via sms, and refused to entertain further questions from the reporter because, according to her, she was “in a critical meeting.”

With that deflection, Onwukwe smartly avoided question that would have required her to explain why the Department of Rehabilitation sneaked N40 million into the 2017 budget as upkeep allowance for trainees at the NFCB, even though the school admitted no students that year.

Onwukwe also dodged a question about why another N150 million was taken from the 2018 budget of the ministry as “upkeep of the trainees and strengthening activities at the following social welfare, rehabilitation and other welfare centres.”

Onwukwe appears to have every good reason to evade questioning. The Departments of Rehabilitation and Procurement in the Women Affairs and Social Development Ministry have difficulty accounting for the several million in budget appropriation allocated for implementing capital projects such as the Abuja rehabilitation institute, and the community-based rehabilitation centres the ministry proposed to erect in each of the 36 states.

In October 2016, then Minister of Women Affairs and Social Development, Senator Aisha Jummai Alhassan, promised to improve the lives of PLWDs through the National Rehabilitation Institute when the Joint National Association of Persons With Disabilities (JONAPWD) and Advocacy for Women With Disabilities Initiatives (AWWDI) paid her a courtesy visit at the National Centre for women Development.

Therefore, in its budget last year, the ministry proposed to spend part of the 2019 federal allocation on the construction of the National Rehabilitation Institute and Resource Centre in Gwarimpa, Abuja.

By November 2019, the ministry, through an advertised tender notice, invited bidders to express interest in the construction and development of the NRIRC at the cost of N75 million, the invitation to bidders showed.

But the intention expressed in the tender notice is at variance with the reality, investigation has revealed.

When the reporter visited the rehabilitation institute in March 2020, no work was going on at the site allocated for the project in Gwarimpa.

Unconvinced, the reporter visited the office of the Independent Corrupt Practices and other related offences Commission (ICPC). At the commission’s department where capital projects are tracked, the reporter learnt that the National Rehabilitation Institute does not exist on the ICPC database.

The reporter later approached the Director of Press in the Women Affairs Ministry to get a direction to the location of the institute.

“No such agency exists under the ministry,” he told the reporter.

“You may check at the Humanitarian and Emergency Ministry instead. They are the one in charge of issues like that,” he said.

But the Director of Press was wrong. Contract award for the construction of the Rehabilitation Institute by the Ministry of Women Affairs actually dates back to 2013 when it showed up in the budget as new. It received N29,270,975 that year before it sprung up again as a new project in the 2019 appropriation.

The National Rehabilitation Institute project came up four times in the budget between 2013 and 2018, and there were initial capital releases for it.

In July 2013 for instance, the Ministry of Women Affairs, in a tender notice, invited bidders to express interest in the construction and supply of materials for the same institute.

The construction works for which bidders were asked to express interest in the 2013 bids included:

LOT 2- Construction of Fence and Gate House at the National Rehabilitation    Institute and Resource Centre Abuja.

A year later, construction work for the rehabilitation institute came up in the 2014 budget appropriation as ongoing under the budget item “WAFF005001464 Establishment of National Rehabilitation Institute and Resources Centre, Abuja.” The sum of N50,270,975 was appropriated for that purpose.

Again in 2017, a year after the JONAPWD got the Minister’s promise of a rehabilitation institute to address disabled persons’ welfare, another N50 million was budgeted for the project under the heading “FMOWA34146185 Counterpart Funding for the Establishment of National Rehabilitation Institute and Resource Centre, Gwarimpa, Abuja.”

In 2018, the project came up again as ongoing in the budget and received 70 million for the purpose. (Counterpart Funding for the Establishment of National Rehabilitation Institute and Resource Centre, Gwarinpa, Abuja.

Crunching the figures, the funds already shelled out for the construction of the rehabilitation institute for the disabled since 2013 hover at about N275 million naira.

That’s an outright violation of the law regulating public procurement in Nigeria really. The PPA frowns at contract splitting and inflation.

It states, in one of its provisions, Section 16, subsection 4.2 (b) of the procurement Act, that adequate funding must be available before awarding contracts. But the ministry violates this provision by splitting the contract award and inflated the cost.

But Onwukwe would not own up when the reporter eventually engaged the Director with its discoveries via a phone conversation. “There is no contractor, because there was no financial backing to award the contract,”  she told the reporter.

She explained that the allocation is not the same thing as money released. She said the only fund released was for

Data from the Accountant-General’s Office showed that there were both recurrent and capital releases to the Ministry over the period after all.

This also includes allocation cash-backed and utilized by the Ministry.

Neither did she explain why she is finding it difficult to bring reporters to the permanent site of the rehabilitation institute in Gwarimpa.

Embezzlement of public fund is a common phenomenon in Nigeria’s public institutions. The trend has given Nigeria a name as one of the most corrupt countries in the world.

On April 30,  the Open Budget Survey (OBS) 2019 on budget transparency, ranked Nigeria 97th position in a global survey of 117 countries. 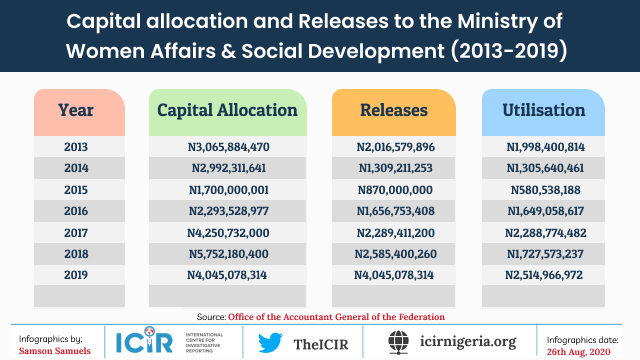 United Nations Secretary-General, AntónioGuterres, ahead of the first-ever SDG summit in September 2019, griped that “we are not on track” to meet a 2030 deadline in many aspects.

Guterres urged state parties to “do what is necessary” to ensure that “we are able to solve the dramatic problems we face.”

He was obviously referring to more coordinated action in realizing the 17 ambitious goals set out in the global agenda– a multi-trillion-dollar program of action that will lift the world’s billions of poor people out of their miseries by 2030.

But barely four months after his charge to world leaders, one of the often overlooked problems the UN Chief was trying to stave off snowballed into a street protest in Nigeria.

January 17,  a crowd of angry Persons Living With Disabilities protested on the streets of Abuja demanding the establishment of a National Persons with Disabilities Commission that will address the needs of PLWDs in the country.

The group urged the Secretary to the Federal Government,  Boss Mustapha, to set up the commission in line with the provision of the discrimination against persons with disabilities.

The demand is not out of place exactly. Discrimination Against Persons With Disabilities (Prohibition) Act signed by President Buhari in 2019 provides for the protection of PLWDs.

The act is in sync with the 2030 global Agenda to which Nigeria is a signatory.

It has been months since the angry protestors issued their ultimatum, but the condition of the people living with disabilities remain the same, if not worse.

Leaving the vulnerable behind

The tragedy has always been about funding and its management. Whenever monies approved for improving lives are not misappropriated in the process of procurement and disbursement, allocations to the Federal Ministry of Women Affairs and Social Development, which implements disability-related policies and programs, suffer a severe cut in annual appropriation.

Analysis of allocation to the women Affairs Ministry from 2014 to 2018 indeed indicates a less than impressive commitment to disability-inclusive development on the part of the government.

Of the N2,992,311,641 budget approved for the Federal Ministry of Women Affairs and Social Development in the 2014 appropriation, only N1,309,211,253, representing approximately 56 percent was released to the ministry, a data of capital release obtained by the reporter with the collaboration of DATAPHYTE, a non-profit Data Journalism project, showed.

This thus left the ministry with a severe cut of N1,683,100,388 in financial resources, amidst competing demands to implement capital projects such as the rehabilitation institute for the disabled and recurrent expenditures to keep the ministry running.

And to further aggravate the situation, only N1,305,640,461 was eventually utilized out of the capital release to the Ministry.

Still, the ministry barely utilize N580,538,188 out of the paltry capital release.

The perennial disregard for the interest of PLWDs is a threat to the actualisation of the Sustainable Development Goals. Its eighth goal, which covers minorities like the PLWDs, seeks to “promote sustained, inclusive and sustainable economic growth, full and productive employment and decent work for all.”

The goal, like the failed Millennium Development Goals 2015, already is going off track in Nigeria.

The CBR does not exist in physical structure, however.

And now, when the COVID-19 spin-offs are added to the litany of deprivation, things only get significantly worse for persons living with disabilities scattered across communities in Nigeria.