No comment
343 views
President Muhammadu Buhari , laying the 2021 Appropriation Bill to a joint session of the National Assembly in Abuja on Thursday (8/10/20). Photo: Olatunji Obasa

President Muhammadu Buhari ,on Thursday, presented to the National Assembly,  N13.08tn budget estimates for 2021  with N3.12tn (23.85 per cent) earmarked for debt servicing.

Buhari, who said the nation’s economy might relapse into recession, stated that  N3.85tn (29.43 per cent) was voted for capital projects, while personnel costs (salaries and allowances) would gulp N3.76tn (28.75 per cent).

Giving other highlights of the appropriation bill, Buhari said the budget was premised on daily crude oil production of N1.86m and oil price of $40 per barrel.

The President, who tagged the proposed fiscal document, ‘Budget of Economic Recovery and Resilience’,   assured Nigerians that his regime would do everything possible to take the economy out of recession in 2021.

The President said, “The Nigerian economy is currently facing serious challenges, with the macroeconomic environment being significantly disrupted by the coronavirus pandemic.

“I am glad to note that, through our collective efforts, our economy performed relatively better than that of many other developed and emerging economies.

“The GDP growth is projected to be negative in the third quarter of this year. As such, our economy may lapse into the second recession in four years, with significant adverse consequences.”

He added that the proposed N13.08tn expenditure also comprised a non-debt recurrent costs of N5.65trn; personnel costs of N3.76tn; and pensions, gratuities and retirees’ benefits of N501.19bn.

He said, “ The 2021 budget deficit,  inclusive of government owned enterprises and project – tied loans, is projected at N5.20tn, representing 3.64 per cent.”

The assumptions, according to him,  include an oil benchmark of $40 per barrel and daily oil production estimate of 1.86m barrels, inclusive of condensates of 300,000 to 400,000 barrels per day.

Buhari said the exchange rate would be based on N379 per dollar, GDP growth projected at 3.0 per cent and inflation closing at 11.95 per cent.

He said the Federal Government revenue, based on the above fiscal assumptions and parameters was estimated at N8.433tn in 2021.

He, however, said the total revenue available to fund the 2021 federal budget was estimated at N7.886tn.

This, according to him,  includes grants and aid of N354.85 bn as well as the revenues of 60 government-owned enterprises.

He noted that the country still faced the existential challenge of coronavirus pandemic and its aftermath, stressing that the development had provided a justification to exceed the threshold as provided for by the appropriation bill. 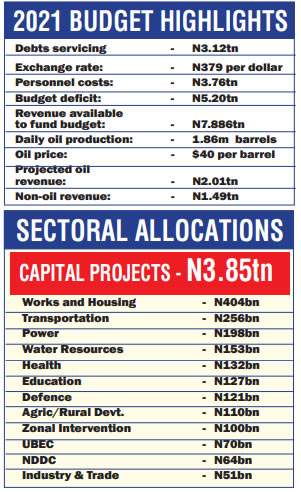 According to him, the deficit will be financed mainly by new borrowings totalling N4.28tn;  N205.15bn  from privatisation proceeds and N709.69bn in drawdowns on multilateral and bilateral loans secured for specific projects and programmes.

He added that N484.49bn provided for statutory transfers in the 2021 budget represented an increase of N56.46bn or 13 per cent, over the revised 2020 provision.

The beneficiaries of the statutory transfers, according to him are the North-East Development Commission, N29.70bn; the National Judicial Council, N110bn and the Universal Basic Education Commission, N70bn.

He said, “In our efforts to enhance national security and human capital development, a major part of the 2021 recurrent cost estimate is allocated to paying salaries and overheads in MDAs providing the critical public services.

“Personnel cost is still our largest single item of expenditure. In the seven months to 31st July 2020, it accounted for 34 per cent of total Federal Government spending and is projected at 33 per cent of 2021 expenditure.

Only federal workers on IPPIS will receive salaries, Buhari insists

“To check the incidence of payments to non-existent personnel and unauthorised allowances, only federal staff that have been captured on the Integrated Personnel Payroll Information System platform will receive salaries.

All agencies must get approval before fresh recruitment

“All agencies have been directed to ensure that they obtain all necessary approvals before embarking on any fresh recruitment. Any breach of these directives will be severely sanctioned.

“A total of N2.18tn  has been set aside to service domestic debts, while N940.89bn has been provided for foreign debt service.

“N220 billion is provided for transfers to the sinking fund to pay off maturing bonds issued to local contractors and creditors.”

Buhari said total overhead costs of MDAs and government-owned enterprises were projected to rise to N625.50bn in 2021, mainly due to the inclusion of the overheads of an additional 50 firms. He said provisions had been made for newly created agencies.

Buhari said N3.85tn  would be made available for capital projects in 2021, with MDAs getting N1.80tn.

He added that N745bn  had been earmarked for capital supplementation; N355bn  for grants and aid-funded projects; N20bn  for the  Family Homes Fund, N25bn for the Nigeria Youth Investment Fund; and N336bn for 60 government-owned enterprises.

Buhari said N247bn  had been earmarked for capital component of statutory transfers; and N710bn for projects funded by multi-lateral and bi-lateral loans.

He further explained that the 2021 capital budget was N1.15tn higher than the 2020 provision of N2.69tn. According to him, the provision moves closer to the regime’s policy target of 30 per cent.